Whenever we talk about testing we come across many words such as defect, bug, fault, risk, error, failure and so on which seems to be very confusing. We are not able to differentiate them properly because meaning of these entire words look same on a broader way. But in actual this is not the case.
So let’s understand meaning of such words. 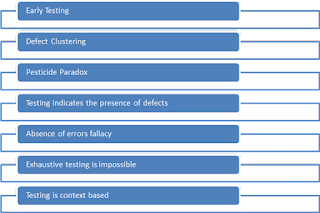 Testing should start as early as possible in SDLC. In early stages cost for solving defects is much less than occurred in later stages.
Order for increase in defects solving costs 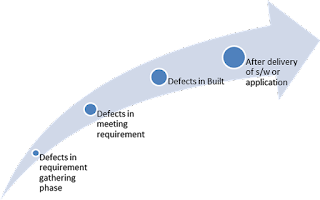 Defects found in early stages or small modules are much more operational failures then found in complete application at later staged.


Testing indicates the presence of defects:

When we do testing it shows the presence of defects. It reduces the probability of defects but it doesn’t mean that all defects are removed and application is a bug free. There will be some more undiscovered defects present in the application.

Customers are mainly concerned with the working of software or application.  They expect it to work efficiently and there desired task gets complete. They are not concerned with what defects are present and how they are getting fixed. If finding and fixing of defects makes the application unusable then it is of no use.

It is not possible to test everything. We need to decide and plan the risks and priorities before starting with testing. Test plan plays a very important role. It should be followed properly and should be modified with phase of the application and time.